The walls of buildings and infrastructure throughout the world turned into the canvases of youth and impacted the world’s populace with shocking messages.

In the 60s The New York Times reported the trend of some young people tagging the subway walls and cars with their names. Soon, everyone wanted a piece of the action and graffiti became widespread. Most markings were scrawl, but some were a gift of art.

The gift came in the form of a man with talent in his hand. Artist Keith Herring brought this art form to a Golden Age by his artistic renditions on unused advertisement panels throughout New York City. Other artists followed suit and to this day, if you look hard, you can find graffiti that was Herring-inspired—bright contrasting colors with bold, clear shapes.

Considered a demon to some and art to others, this signage was a statement from artists who felt they had right to make public art for art’s sake and gang members who expressed their aggression on walls with text and image in a declaration of turf.

While the art world gave Herring wild accolades for his work, cities worldwide struggled to control tagging, or posting graffiti in conspicuous public places.Herring, meanwhile, had his work codified his work onto toys, books, games and other home accessories in Europe and the U.S. 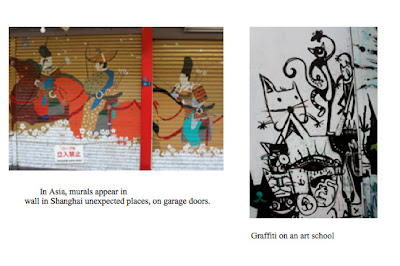 In Asia, artists worked to little notice on impressive murals that appeared throughout Asia by the end of the century.
Posted by Matthew Bamberg at Monday, January 30, 2012 1 comment:

Email ThisBlogThis!Share to TwitterShare to FacebookShare to Pinterest
Labels: graffiti 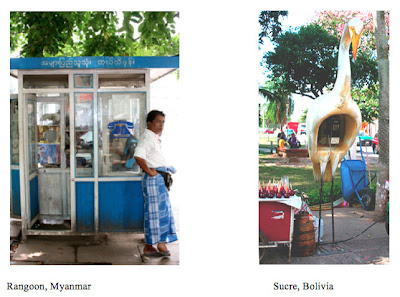 Everyone knows that the typical landlines are quickly becoming a thing of the past. To be sure, they still exist in homes and businesses everywhere, but their appearance on the street—phones inside hallow rectangular prisms, a safe, quiet place for callers to duck the sounds of traffic on the street--is dwindling as more and more people chat on cell phones in the open air. 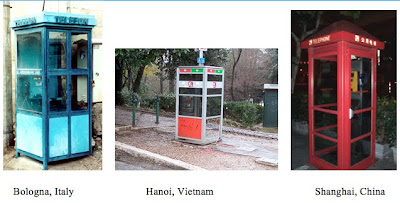 Many phone booths, such as those in several cities in Bolivia went mod in the 60s, in the form of phones housed inside bird sculptures as they had (and still have) in the city of Sucre, Bolivia. In Morocco, phone booths are called teleboutiques. Others around the world varied in color from icy blues to fiery reds.
Posted by Matthew Bamberg at Saturday, January 28, 2012 No comments: 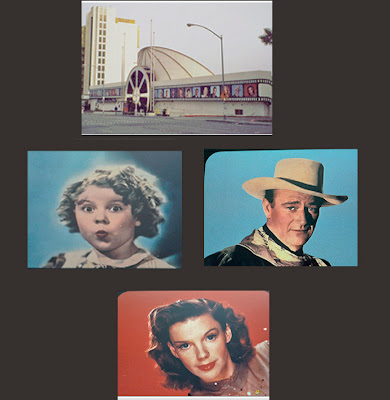 Hollywood has always been an inspiration to artists all around the world, and the legends of the twentieth century starlets appeared everywhere in Las Vegas.

In the early 1990s actress Debbie Reynolds bought a hotel and plastered it with murals of her favorite stars.

The hotel was demolished after Reynolds declared bankruptcy some five years later.
cafe art
Posted by Matthew Bamberg at Thursday, January 05, 2012 No comments: 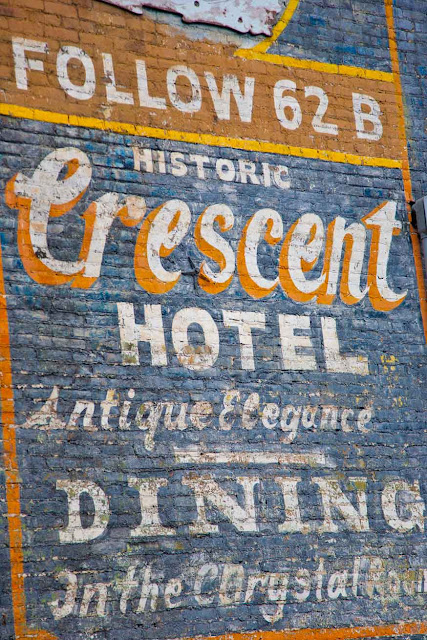 These painted wall signs can be found in cities that were created in the late 1800s.

By the late 20th century some of the signs remained and became known as ghost signs.

They contain faded and peeling paint, often revealing a pentimento effect, one image showing through another.

The lead paints and other chemicals used to create the signs, durable yet toxic, exposed the sign painters, who were often called wall dogs, to an environmental hazards at the same time as they made art that seemed to last forever. vintage photos
Posted by Matthew Bamberg at Wednesday, January 04, 2012 4 comments: 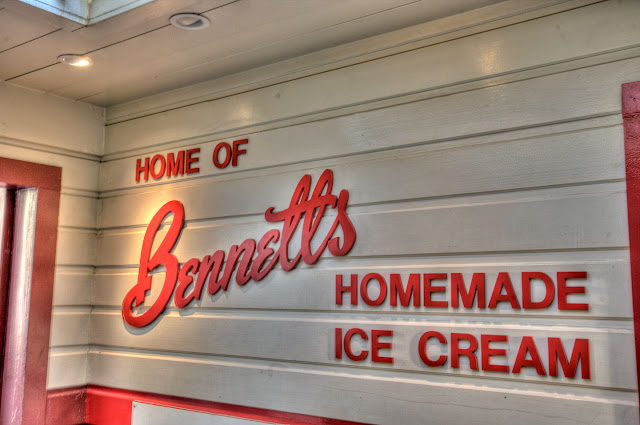